Meet singer-songwriter Oktoba and his music 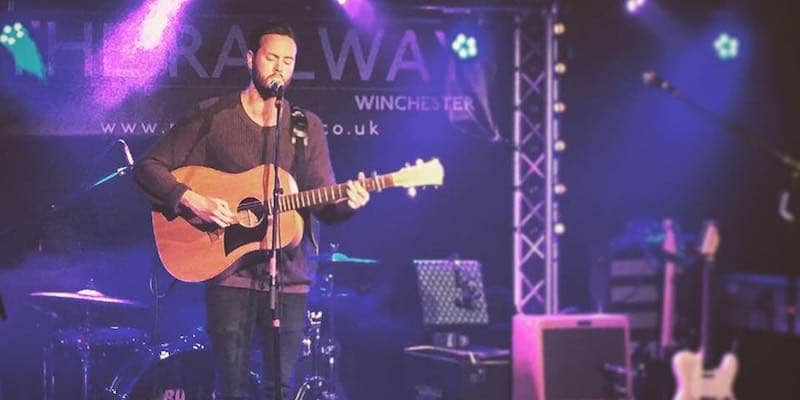 Oktoba is Chris Athorne’s solo project. His music is a sublime blend of folk, americana and pop. After the release of his debut EP ‘Tales and Shadows’ and of his debut album ‘Smoke Signals’ last year, Oktoba has spent most of this year playing shows and writing new music.

The first of Oktoba’s songs that I heard was ‘Tongue Tied’ (a pure gem!). For a few minutes, the world just stopped moving. It is the best feeling in the world when a song provokes that reaction. I don’t know about you, but it does not happen to me every day. Afterwards, I just listened to the rest of his songs. The same magic happened. I find his music mesmerising and authentic. It is also very beautiful (his voice + the arrangements & lyrics). He has quickly become one of my favourite artists. Thus, I cannot express how happy I am to share with you this interview. Small warning: if you haven’t heard his music yet, you’re about to get blown away…

Thank you so much for this interview. It is a real honor to include Oktoba in our Artist Highlight series! Can you tell us a little more about your story as a singer-songwriter? When and how did you get into writing music?

It’s no worries at all. Pleasure to talk to you.

Music had always meant something more to me than most things in my life growing up. You can’t explain it, you just know that there’s a connection there and one day you’ll figure out what that is, hopefully.

For me, it was the era just after school. Me and my best mates would take surf trips down to Cornwall. Live in a tent for a few weeks, sit around a fire and listen to music and surf every day. They were good times. Artist we were listening to were Ben Harper, Mason Jennings, Jack Johnson, The Beautiful Girls, Sublime. Plus a few of the classics: Bob Dylan, The Beatles, Otis Reading. A crossover of surf, soul and folk artists, but a few that carried a certain raw style of songwriting, one that totally resonated with me. I began learning the guitar, writing songs in that kind of style. That was the backbone of my early writing. Shift a couple years on and I started my first band ‘This Boy Wonders’. A four-piece folk, rock band. We went for about 4 years. It really taught me the ins and outs of performing. Especially with other musicians. We had a great run and played some memorable shows. Reading and Leeds to name the pinnacle.

I then moved to Brighton from my original home in Suffolk and started my new project, Oktoba. It was to be my solo venture. A clean slate from the band to give me the chance to go back to my roots with more stripped back folk songs. I felt that I had got a little lost with my musical direction in the band and that starting out again alone would give me a fresh focus. So far, I’m happy with the decision. It’s great writing songs you feel you have total control over and are true to where you want to be.

Who would you say are your biggest music influences? Do you have an all-time favourite album?

I’ve found that influences change as you move through it all. At the beginning it was definitely Jack Johnson with his first two albums ‘Brushfire Fairytales’ and ‘On and On’ that struck all the right chords with me. I’d even say he was the reason I started playing the guitar. But that was a while ago now and as things move on as do influences.

Overall, I’d probably have to say the one artist that continues to inspire me is Justin Vernon. The first Bon Iver album ‘For Emma, Forever Ago’ will more than likely go down as one of the finest album ever and it still blows me away when I listen to it. His energy, production, execution and songwriting are just awesome and have definitely played a part in helping me explore new territories in my own music.

Your music style is just the perfect balance of pop, folk and americana. Did it take you a long time to find your sound?

That’s very kind of you to say, thank you. To be honest I still feel like I’m finding my sound. The sound for the album ‘Smoke Signals’ was made in the studio. Working with producer Tim Bidwell, a good friend of mine. I went to him with the songs in their rawest format and together we built it up. Trying this, trying that. Inviting musician in to play on the tracks. It was a great experience and I feel extremely lucky to have worked with the people that I did on it. I’m super proud of what we made but I’ve got a feeling the next album will move on ever so slightly from that sound. Still in keeping with it, but just exploring new styles and musical directions. I’m excited about it.

Which one of your songs would you pick to introduce your music to a new listener?

Obviously I have my album favourites. I always tend to like the one that isn’t the most obvious choice. I would probably have them listen to the final track from the album, You To Me. It’s an honest song, not overworked and a great one that incorporates most of what I’m about.

I know it might be a stupid question but…why the name Oktoba? I know I would have regretted not asking you this.

It’s all good. You’re not the first and certainly won’t be the last I imagine. I didn’t want a name that was just what I am called. I feel a name should have imagery attached to it but yet still be personal and meaningful. There was a few others before it but I just started thinking about who I am, what I like and I landed on the month I was born in. Autumn is my favourite time of year and I want my music to feel at home in that season. A lot of inspiration comes in the Autumn for me. I guess it just felt right. The spelling adjustment was just me being clever. Although it wasn’t that clever because finding me on Google is a nightmare.

Can you remember the very first song you wrote for the Oktoba music project?

Yeah, absolutely. It was a song from my first EP called ‘On and On’. I remember it because it was the first song I had written in a while that got me excited. It took me half an hour to write. Afterwards, I remember being super proud of it and thinking this is a nice new direction to go in.

A little songwriting question: Do you always have the same creative process when you are writing a new song (like thinking of a melody then working on the lyrics)?

I very rarely have a topic in mind to specifically write about. I have many ideas of what I want to say but nine time out of ten the songs words will be inspired by what I’m working out on the guitar. A certain string of chord may influence an emotion and word, that word a sentence and then I usually know where to take the rest of it from there. Mostly it’s me singing odd sounds until a real word fits though. And even after the words are there, it still sounds like me singing odd sounds anyway.

You released last year your debut album Smoke Signals. You also had done an EP (Tales and Shadows) before that. Did you release them both independently? If so, did it feel a little daunting, especially the first time around?

Yeah, they were both released independently. It always feels daunting releasing a new record. With my previous project ‘This Boy Wonders’, we made 6 records. All released on our own. Every time you do it you learn a little bit more about how to do it better or more importantly what way not to do it.

So, by the time I had come around to releasing ‘Smoke Signals’, my knowledge on how to go about it was relatively well informed. Obviously in an ideal world you would want a record label helping you out with the release but those chances aren’t always there. So it’s just about being confident that you know what you’re doing or at least acting like you know. I’m happy with how it went out. I received some amazing reviews around the world and the success that I have had this year is undoubtedly off the back of that album. So yeah, I feel pleased about the result.

Did the album come together naturally? Were there many songs, for instance, that did not make the cut?

I am usually always writing, so there are always tracks that I would like on the record but you just can’t have them all. So yeah, there were a few that didn’t make the grade. Smoke Signals was a collection of songs that I had written all within a year of each other, give or take a month or two. So in terms of a body of work and where I was at with them all mentally and emotionally, it made sense to put them all together. I like the idea that an album should be a chapter or an era of someone’s life. Stories of a certain period. Whether that being a break up, a traveling experience or anything that has genuine meaning to the writer. I feel the record reflects that time in my life.

Was the choice of the album name an easy pick? I feel like the title track reflects well the spirit of the record. But did you hesitate between other titles?

From the start of recording I knew that’s what I wanted to call the album. Smoke Signals as a track has a lot of personal meaning to me. It was a conscious choice to name the album after it. Never a doubt.

The album is a real gem. Do you have a personal favourite track in this record? Like a song that has a very special meaning for you (not that the rest if not meaningful)?

Yeah, again I think I’d have to say ‘Smoke Signals’. Without wanting to bring the interview tone down, I lost my father last year. Obviously a big life moment for me and my family. But at his funeral, in front of an unbelievable amount of people, about 500, I sang Smoke Signals. It was amazing to be able to do that and I’ll remember it forever.

I know you have some exciting live shows coming up. But do you have any new music in the work?

Yeah, it’s been a great year for shows. I’ve had a blast. But yeah, I am going to be heading back into the studio very soon to start on the next album. I’m very excited about the next songs and can’t wait for people to hear them. News on that will be announced sometime into next year.

Last question: What song/album do you have on repeat right now?

I’ve got a couple. Matt Corby’s latest, ‘Telluric’. An incredible record and most definitely my favourite album this year so far. Favourite track: ‘Knife Edge’. Secondly, It’s got to be Michael Kiwanuka’s ‘Love and Hate’. A real genuine timeless record, awesome.

No worries. Thank you.

If you haven’t yet, check out Oktoba’s stunning debut album on Bandcamp and Soundcloud.