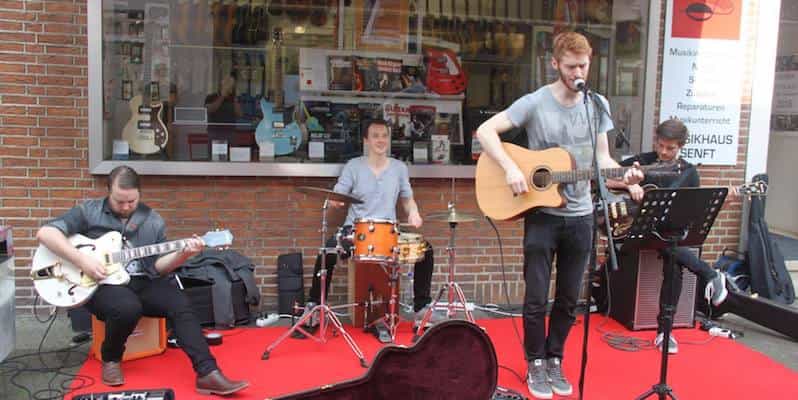 In May, David Nevory released a brand new EP, Light In The Shadows. It is a superb collection of folk and folk-rock songs I cannot recommend enough. My melancholic little heart is in heaven every time I give it a spin (read the full review here). I had the chance to get to ask David a few questions about his story and this new EP.

First, thank you for taking the time to do this interview. The last few weeks must have been quite busy with the release of the new EP, Light In The Shadows.

Well, thank you for your dedication and your time, too. Definitely, it takes quite some effort and good planing to get a new release out properly. But I’m very happy to finally let the people hear what the band and I have been working so hard on.

How would you describe your music to someone who might not have heard anything yet?

Well as a genre, I would most probably just call it Folk. Sometimes Singer-Songwriter, sometimes Folk-Rock fits better to classify it, depending on what particular songs are meant. But sometimes all of these genres don’t say much about the music itself. So in the end, I guess I would tell the people to listen for themselves and call it whatever they like.

Which song would you pick to introduce your music to a new listener?

Looking at our new release, I would pick “Seven Seals”. I think this song is somewhere between our quiet, acoustic songs and our louder, full-band songs.

Are you an independent artist or are you signed to a record label?

Independant. The band and I do everything on our own, from producing and publishing the music, to designing our album covers and website. That’s why we are very thankful for fans who share our music and come to our gigs – this kind of support is basically the reward for our hard work.

It’s always quite fascinating when talking to a songwriter to find out more about how he/she started making music. Have you always gravitated toward music naturally, or was there a defining moment that made you start writing music?

As a kid I would listen to many songs and often think something like “that part in this song should be different and combined with this other song, it would make my favourite song ever”. So I’d make up new mixtures of songs in my head and sing them, long before I learned to play any instrument. I guess I’ve always had a very strong urge to create something new in search of “the best song” I could imagine.

Can you remember the first song you wrote?

I can. I was roughly twelve years old and it was the worst song someone ever could write (laughs). I called it “Burn it” and it consisted of only one short, annoying melody and some very strange lyrics about a guy who set his own house on fire.

Who are your main music influences? Is there an artist you particularly look up to?

I guess the moment I stole the “Greatest Hits” CD of Bruce Springsteen from my parents as a teenager, changed everything about my taste of music. All the other stuff I’d listened to before, mainly Hip Hop and Pop music, somehow began to feel trivial to me. I fell in love with Bruce’s writing and that dusty-road-american feeling his songs convey. So he undoubtedly is the biggest musical influence for what I do.

You’ve recently released Light In The Shadows EP. Congratulations again! Was the process of making this EP different from the one of your previous EP The View?

Thank you! It was actually very different. “The View” was recorded in a professional studio in only four days as some kind of a demo tape, whereas the new “Light in the Shadows” was completely recorded in our band room and produced by myself. It took an incredibly long time to get all the production work done whilst studying. I had clearly underestimated that at first. Starting with the very first recording sessions in September of last year, the band and I took all the time we needed to get this EP to where we wanted: A still raw sound, that’s at the same time polished to the extend we want it, without sounding too sleek.

I felt like the general atmosphere of the new EP is a bit more introspective (in songs like Creatures or Peace of Mind). Is this something you were going for?

This EP definitely holds more quiet and emotional songs than the last one. I also think I’ve improved my writing since the last release and was able to give some of  these songs more lyrical depth. So indeed, introspective may be the right word.

What is the first song you wrote for this EP? Did the idea of Light In The Shadows come with this song, or did it come later?

The first song I wrote for the EP was “Peace of Mind”, right after watching a really sad drama movie on television that somehow inspired me. The idea for the title of the EP came much later, when all the songs had already been recorded. I think most of the time there is some kind of hope in between all of the negative stuff I write about. And I felt that these five songs share that hopeful feeling, which I tried to describe as a light in the shadows.

On your website, there’s a nice picture of you with your band. Have you been working with these guys for a long time (and on other projects)?

Yes, I’ve been lucky enough to always have talented musicians around me, that share my passion for Folk music. Although we’ve had two members leaving the band due to lack of time, we’ve still managed to keep a solid band together for two years now.

Was there a song that was particularly difficult to finish on this EP?

“City of Dreams” was the hardest one to finish on this record. I guess the production took some extra time here, because the song is not as quiet and minimalist as the others. The more instruments you have playing at the same time, the more trouble you get mixing the song as a not-so-experienced producer (laughs).

With such a beautiful EP, I can’t help but ask if there is a full-length album project in the near future?

I definitely have an LP in mind as a goal for the next few years. But for now, with the small time (and budget) the band and I have as students, it’s more realistic to go for at least one or two more EP’s before starting such a big project.

Recently I’ve talked to a musician who had done a Kickstarter campaign with his band to finance their debut album. Is this something you’d be interested to do in the future?

I’ve never really looked into the possibilities of crowdfunding for musicians, although I know there are plenty. So who knows, maybe that’s a thing that could bring a full-length album closer to reality for us!

What do you think of this new trend of crowdfunding in music? Do you feel it makes the process of making music more open?

I think anything, that gives people a chance to put into practice what they have in their creative minds, is a good thing! The world needs all kinds of art, so it’s good to see people finding ways to spread it. I think crowdfunding can be a very powerful tool for less established artists, if used right.

Do you have many concerts planned for this summer?

We have some gigs coming up in July and later in September and October. Hopefully we’ll be able to take some time off for recording in August though, because the next EP is already done in my head. Well, only in my head.

Thanks again for taking the time to answer my questions. Best of luck with everything!

Thank you! Wish you all the best for the blog.

Want to find out more about David Nevory? Check out their website and their music on Spotify.