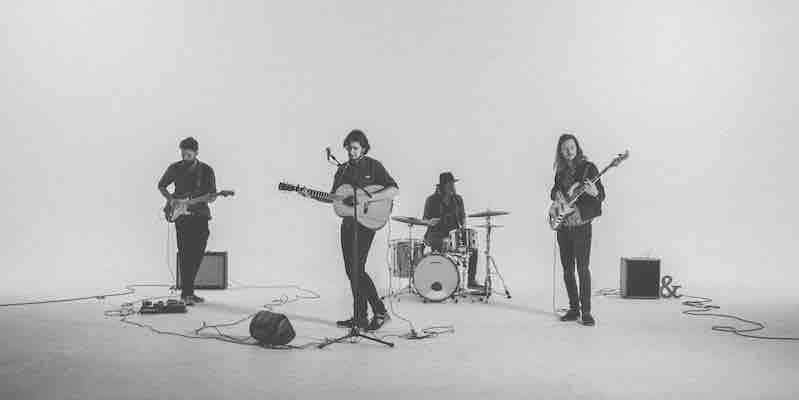 For our new interview with Neo & Neo, we had the chance to ask the Swiss indie-folk band NEO&NEO a few questions about their debut album “Before The Birds Start To Sing”. Ambitious and surprising, it is a brilliant folk record. Without further ado, let’s meet the band!

First, congratulations for your new album “Before The Birds Start To Sing”! Could you introduce Neo & Neo and its members in a few words?

Thank you so much. NEO&NEO consists of Dominik (acoustic guitar/vocals), Raphael (electric guitar/backing vocals), Yannick (drums/backing vocals) & Janos (bass, backing vocals). We live in different parts of Switzerland and rehearse near the beautiful lake of Zurich. Besides our passion for music, which pretty much fills up most of our time, we all have some weird habits to calm ourselves down.

Yannick likes to listen to old people radio where they only talk and they don’t play any music. These boring narrations make him feel as relaxed as an old man. Janos, on the other hand, is slightly addicted to cleaning his ears with “Q-Tips” and he describes the feeling as sexy. Only problem is: his right ear is so close to his coughing nerve that cleaning his ears (or whatever it is he does….) automatically evokes the sudden urge to cough. Dominik is a bit of a cleaning nerd too. So to calm himself down, he cleans his flat – way too often. Another way of relaxing is to daydream. Raphael revealed his secret business idea: he wants to organize naked weddings and be the “master of zeremony”. He is still working on the details of the concept.

Can you remember the first song you worked on together?

NEO&NEO doesn’t have a classic band history. The band was formed in 2015. The first song we worked on together was Hotel Room. Dominik started the project earlier, out of life crisis (no job, broken relationship, no flat, blabla….) in 2012. He started to record the EP “Of Flames and Games” (Helium Records). Since then the project steadily grew, which is still so amazing to see.

Were there artists you were listening to more when working on this record?

It’s often small and daily things in life that influence the songwriting. Someone tells you something special, something you’ve never thought of before. You accidentally meet a pretty girl in the train…It’s these little things that might have a big impact on a song.

And there’s, of course, a lot of artists that influenced the process of writing the album. Just to name a few: Delta Spirit, Tallest Man on Earth, Mumford & Sons, Gregory Alan Isakov, Mighty Oaks, the song Moonlight Shadow by Mike Oldfield, My Heart Belongs To Cecilia Winter or Joss Whedon, Creator of the series “Buffy The Vampire Slayer” (1997).

Classic question: Which one of your songs would you choose to introduce your music to a new listener?

We decided to release “I Lost My Heart In San Antonia” as our first (and only) single, simply because we thought it’s the easiest song to grasp for a new listener. It has a clear melody as well as a catchy guitar riff.

First of all, the name has nothing to do with the guy from Matrix and his leather suit (just because we get asked that a lot). NEO&NEO stands for the idea that you can look at every aspect in life from two sides: black and white, up or down, stay or go etc. Often, we find ourselves struggling with a decision, carefully weighing the pros and cons. Our modern society is full of decisions, we find ourselves overwhelmed or maybe even trapped by too many options and multiple decisions that we have to take in order to find out who we are and what we want.

In our album you’ll find a lot of contrasts like “I’m in high spirits, but I’m low”. After all, NEO&NEO is a way of saying that listening to your heart gets more and more complicated in our society. It is a also a way of saying that there is more to a decision than to just say yes or no, to love or to hate. It’s the “grey zones” in the middle that matter because they shape reality.

Let’s talk about the album. What was the starting point of the album- was it a concept/general idea you had, a song you wrote? Was there something that particularly inspired the record (might be an idea, a personal event, a book, a song)?

We released our first EP “Of Flames and Games” in 2012 (as a solo project), followed by the single-CD “A Big Black Box Of Questions” in 2014. We felt that it was time to come up with a full album. We wanted to capture the songs in a full record. We also wanted to collaborate with a indie producer from Switzerland (Philippe Laffer, Alterna Recording Studios, Basel) to try, with his creative support, to get our songs to the next level,

Why the title “Before The Birds Start To Sing”? Was it an obvious choice or were there any other titles you considered for this album?

“Before The Birds Start To Sing” is a line from the song “I Lost My Heart In San Antonia”.

It was actually our video producer, who suggested to use this as an album title. We’ve also considered “Wild at Heart”, “Hotel Room” and “Stifle those ghosts”.

“Before the Birds Start To Sing” symbolizes the moment before dawn, before the birds start to sing, when everything is still possible and the new day hasn’t yet begun. It’s a metaphor and a real story at the same time. Dominik (singer) wrote the song while hiking on the “Way of St. James” in Spain… very cliché. It describes a long night at a Spanish bar involving a couple of gin tonics, a beautiful Spanish girl and a personal revelation.

Was there a song on the album you found particularly hard to finish?

The hardest song to finish during production was probably “Wild at Heart”. We struggled to find the right rhythm. After recording several versions, we had to start all over again because we weren’t satisfied with the sound and how the percussion sounded. We ended up recording the different parts of the drums individually. Instead of using drumsticks, we used our bare hands on the snare to make it sound more natural and authentic.

Before we started working on the album, we had some sort of internal selection process where we tried to decide which songs were in or out. We got some help from our producer and other “associates”. There were two songs we wanted to put on the album that didn’t make the cut. On the other hand, the songs “I lost My heart in San Antonia” as well as “Californian Sun” ended up more or less spontaneously on the record.

What is your dream collaboration- if you could work with any artist?

Raphael: Wants to build a children’s choir with Ellie Goulding….stricktly professional of course.

Any upcoming projects (music videos, music, shows) for 2017 you can share with us?

We will play some of gigs in January 2017 in Switzerland, in February we will be touring for two weeks all over Germany (Hamburg, Berlin, Frankfurt etc.). Also we will release two more songs of the album through our own social media channels.

Thank you for taking the time to answer my questions! Best of luck with everything.

Thank you, best of luck for you too.

Check out their music on Spotify.