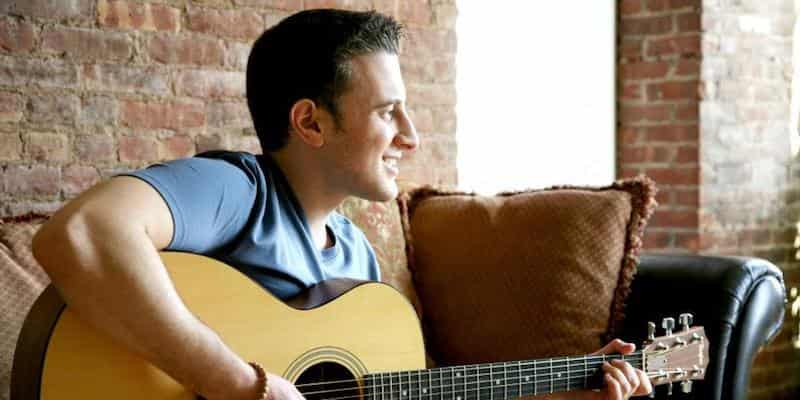 I recently got to ask the very talented Michael Jayson a few questions about his music. Michael is a singer/songwriter (and also an actor) living in New York City. His music is a brilliant balance of pop and rock with a hint of folk. Back in August, he released a new Ep “The Living Room Sessions”. In this release, he shares with us a brand new song “What We Make” as well as acoustic reworks of 3 songs from his first Ep “Running The Spectrum”. With these stripped back versions, his songwriting simply shines. He reminds us of how powerful music can be with just a guitar, a beautiful melody and a voice that rings true. So, without further ado, let’s meet him.

Thank you so much for taking the time to do this interview. Your new EP is fantastic! First, to get to know you better, can you tell us a little about your story as a singer/songwriter? I know that acting is a huge part of your life. How did you get into writing music too?

It’s my pleasure! And thank you! I’m so glad you enjoyed it! My writing started like most new life adventures start: with a break up! I had been acting and playing guitar for a while back in college, but I never put words to paper. Then one day after my girlfriend and I broke up, I was sitting at my desk strumming some chords, and words suddenly started flowing.

Granted, the songs weren’t very good at the time, but they just kept coming. I fell in love with making these little three minute stories/glimpses into life, and somehow, I was lucky enough to have people around me enjoying them and relating to them.

Who are your biggest musical influences now? And do you have an all-time favourite album?

My biggest musical influences right now are acts like The Script, Ed Sheeran, Ben Rector. Their music surrounds you from all sides while anchoring you with such amazingly intimate lyrics.

I have to say, though, the band that made me want to write music in the first place is Matchbox Twenty. I know those first three albums by heart, and “Yourself or Someone Like You” is one of my favourite albums ever. Rob’s writing was perfection, and I listened to “Hand Me Down” on repeat for weeks, WISHING that I could write something as elegant. I’m still wishing today!

Which one of your songs would you choose to introduce your music to a new listener?

Hmmm….that’s a tough one… I think I would have to go with “What’s His Name”. I tried to go for a fun, empowering vibe with that one. Hopefully if the listener enjoys that, then I’ll be able to entertain them with the rest of the EP, too!

Let’s talk for a bit about your first EP Running The Spectrum. What was the first song you wrote for this release?

The first song I wrote for that release was actually the last song on the EP, ”Second Thoughts”. My 85-year-old aunt was one of the most active people ever. She’d be up at 5am every day, walk everywhere, and never stay on the phone longer than five minutes because she was always “heading out”.

“Second Thoughts” is inspired by that phone call. The song just became a message about reflecting and taking time to enjoy what’s around you, and I knew I wanted that to be almost like the musical epilogue of the EP.

Was your pop-folk sound difficult to find? Or have you always gravitated towards those genres of music?

I think I’ve always gravitated toward that sort of sound. I love all different types of music, but there’s something so satisfying to me about organic instruments mixed with just a little bit of spice. Makes it interesting…

You have recently released a new EP that is mostly an acoustic rework of your previous one. All the songs feel new though. What gave you the idea/envy to do that?

I’m a HUGE fan of alternate versions! When you’re used to a song and suddenly someone goes “Hey! Here’s what you like, but flipped on its head and completely changed”, it’s like cognitive whiplash in the best way!

As for the acoustic sound, most songs today are produced/processed to the fullest extent. I’m not saying that’s a bad thing, but there’s something beautiful about just stripping it down. One of my favorite albums is Eric Clapton’s “Unplugged” (The first song I learned on guitar was “Layla” Unplugged, and I still like it better than the original!) I always said if I made an EP, I’d want to make a counterpart like that. You’re taking away all the window dressings and letting the chords/words speak for themselves. If they can hold their own in that state, that means you might’ve done something right.

Great songs, I think, have a life of their own. Their meaning can change through time for the listeners. Do you have a song that now means something totally different for you from what it originally meant when you wrote it?

I completely get what you’re saying! It’s incredible how some of my favorite songs have taken on new lives as I’ve gotten older. With songs I’ve written, though, I feel like that can never happen because the meanings and reasons for writing them will always be so clear cut in my mind.

The upside to that, though, is that they’re almost like glimpses into my past. I can read the lyrics of a song, no matter how old, and remember exactly where I was emotionally at that point in my life. To be able to look back like that is actually a really nice, liberating feeling.

Do you have a personal favorite in all the songs you have released so far?

Ahhhhh they’re all like my babies, but I think I’d have to go with “Through Your Eyes”. It’s a simple song, but a very personal one. And the best part is that everyone has their own interpretation of it, but no one actually knows what it’s really about. It’s like I get to connect with all these people while still keeping a secret just for me.

Any exciting upcoming projects you can tell us more about (music-wise/acting-wise)?

On the acting circuit, I actually just finished up a great little play called “Elegante”. Music, though, is the priority for the next few months. We’re working really hard to finish up the third EP by the Spring (back to full band songs!), and my band is ready and itching to play gigs around New York!

What is the best piece of advice you have ever received as a musician/an actor?

Always be true to yourself. Whatever your sound is, make it. Whatever your heart tells you, act it. Whether it be with the arts or just in life itself, put yourself out there. That’s the only way to find truth, and people respond first and foremost to truth.

Last question, what song/album do you have on repeat right now?

Oh dear lord, pretty much anything by Ben Rector. A friend of mine was telling me about him for MONTHS, and I finally listened to him when I was backpacking through Europe. His “Brand New” CD became my soundtrack in London! It’s an incredible album with a beautiful flow and story from beginning to end, and I can’t recommend it enough! If you haven’t heard his stuff already, you need to get on that right now!

Thank you! Best of luck with everything!

Thank YOU for having me!!

Check out his music on Bandcamp and Soundcloud.