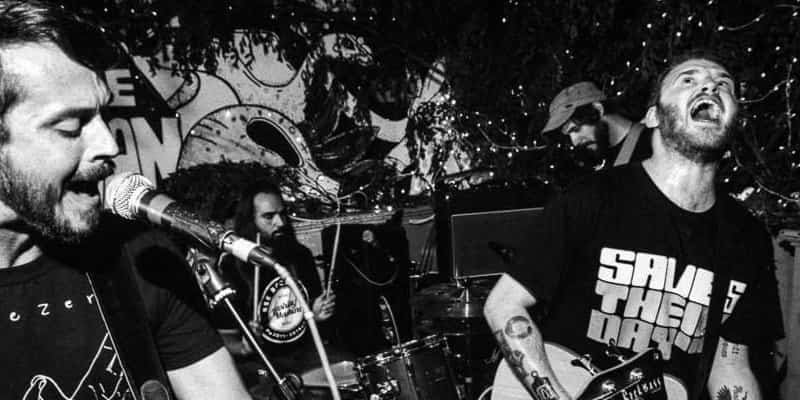 Ipswich based War Waves are back with a head banging new song! ‘Horses’ is the first single from their forthcoming and highly anticipated second album, ‘All That We Lack’ (out October 3). I had the chance to get an interview with Marc Newby (singer/guitarist/songwriter from War Waves) to talk about the new single, and about what the fans can expect from the upcoming release.

First, thanks for agreeing to do this interview. Congrats again for the new single, ‘Horses’.

Thank you – my pleasure!

What 3 adjectives would you pick to describe War Waves, and why?

Emotive, unstable and anthemic. A bit of a boring answer, really…and I guess self-explanatory.

Have you always gravitated towards that genre of music (indie-rock/alternative rock)?

In terms of creating music together? Certainly. But as individuals we all have wide reaching influences and musical tastes, spanning all genres really.

Can you remember the first song you guys wrote as War Waves?

Now you’ve got me…most of the songs from the first album were written by me over the last few years and before the band got together properly, I would just take them to different friends hoping they’d flesh them out! I’d say Ball Games was one of the first, if not Signals.

Which one of your songs would you choose to introduce War Waves to a new listener?

I guess Horses would probably be that track. That was certainly the thinking behind making it the first single.

You’ve released last year your debut album (amazing record!). How different has the making of the new album, ‘All That We Lack’, been?

Thanks very much, that’s very nice of you to say! The whole process of this album has been totally different actually. I still wrote all of the songs, but I guess for the first time I was writing with a band in mind, rather than songs which I’d just play on my own. We also recorded it in a bigger studio (Punch Studios, Ipswich) than before and recorded most of the instrumentation live, which made a big difference as I felt it captured our natural sound more. We also had someone in mind to specifically mix it with us (the wonderful George Perks), rather than doing it ourselves. That extra input and different insight was invaluable.

Your new single ‘Horses’ will be officially released July 18. It has already received some great feedback. Was it an obvious choice as the first single? Or did you hesitate between ‘Horses’ and another song?

Horses was certainly always going to be a single, and I think we all decided pretty quickly that it would be the first single from the new album. The feedback has been brilliant so far! It’s been picked up on national radio already which is great. Hopefully we can build on that.

Which artists are your main influences? Were there new influences for this album (like a new release that made you want to explore different sounds)?

We all have separate influences which I think we all show in our roles in the band. I keep trying to shoehorn the Gaslight Anthem in at every possibility, but that’s not always met with encouragement from the others! Collectively though, we can all agree that Brand New, Frightened Rabbit and The Smiths are probably our biggest influences.

What is your favourite album/song at the moment?

Personally, I’ve been listening to Pinegrove pretty much nonstop for a few months now. Mainly their collection of early eps and demos ‘Everything So Far’.

There’s no plans for a tour as such, we’re not really a touring band at the moment. There will definitely be a lot of shows in support of the single and album though.

Is there a band/artist you dream to tour with one day?

Again, personally speaking, I’d love to play with Brand New…although it seems that our time might be running out on that one!

To finish, what can people expect from ‘All That We Lack’? Is there an overall theme?

It’s a bit heavier than the first album and a bit darker as well. I’ve certainly struggled over the last year and I think that’s reflected on this album – lyrically at least. Now I’m slightly out of the other side of it all, I can look at some of the album and see positivity in it, although that may just be me. There are the standard War Waves themes; self-doubt, sex and death!

Thanks for taking the time to do this interview. I can’t wait to hear the new album!